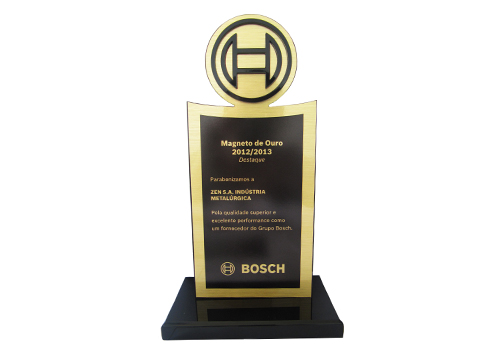 ZEN received the Gold Magnet Award, granted by BOSCH, a global leader in the supply of technologies and services, during the Supplier Meeting held in Campinas (SP).

In its second edition and with the theme "60 years of history with the best partnerships", the award seeks to recognize the partners that have the best performance in terms of quality, competitiveness, delivery, social and environmental management, logistics, business partnership, management Of projects, punctuality and innovation.

ZEN was the winner in the "Highlight" category, the highest prize of the event, which recognizes the supplier that has a differentiated posture, either through proposals for technical improvements, logistical optimization, rapid response to a special request, among others. "It is a very special award that recognizes contributions in terms of innovation, quality, excellence, competitiveness and partnership," said Gilberto Heinzelmann, president of ZEN.

According to Heinzelmann, the combination of actions and evolutions in all the cited issues led the company to be considered a prominent supplier for the Bosch Group. "It is a great recognition, which proves that we are acting effectively and in the right way," he points out.

Other aspects have also led to the receipt of the award: the partnership work carried out for the launch of the new family of BOSCH impellers, operational excellence using world-class manufacturing concepts and equipment, continuous investments to increase productivity, and professional training.

These cookies are used to understand and analyse the performance indexes of the website. They collect information in order to identify interests, delivering a better user experience that is relevant to you.

These are those that are still in the classification process, along with the individual cookie providers.