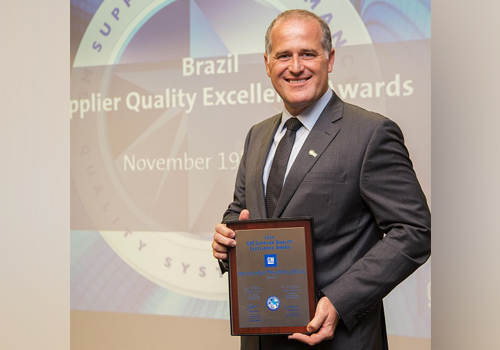 Acknowledged worldwide for being the largest independent manufacturer of starter drives, in addition to free wheel pulleys and tensioners, ZEN achieved yet another important sign of market acknowledgment. The Brazilian manufacturer received the Supplier Quality Excellence Award from General Motors. Alongside industry giants, who also stood out in the Chassis category, ZEN was acknowledged for the development and supply of the ABS brake system component. Named as Pulse Wheel, together with sensors has the function of controlling the variation of the rotation of the wheels sending signal to the ABS system to act.

GM's supplier since 2010, ZEN has met or exceeded the quality requirements of the automaker. The strategy of the manufacturer is to offer, in addition to innovation, products and services with quality excellence and, with this, to guarantee competitiveness in the market.

This is the second consecutive year that ZEN receives the Supplier Quality Excellence Award. According to the CEO of ZEN, Gilberto Heinzelmann, who attended the award ceremony, "being acknowledged for the second consecutive year as one of GM's best suppliers shows that we are on the right track. This award reflects the team's commitment to maintaining the highest quality standards and meeting the requirements of our global customers," he says.

The GM Supplier Quality Excellence Award is a global award also held in Europe, North America and Asia and includes suppliers who have achieved 13 specific quality criteria, such as having ISO/TS and QSB certifications, providing components and/or subsystems within the metrics of required quality, have an adequate system of program management, timeliness of delivery, not cause any production stop, among others. This year's evaluation also took into account companies that have a quality culture in place.