ZEN is one of the 150 Best Companies to Work for 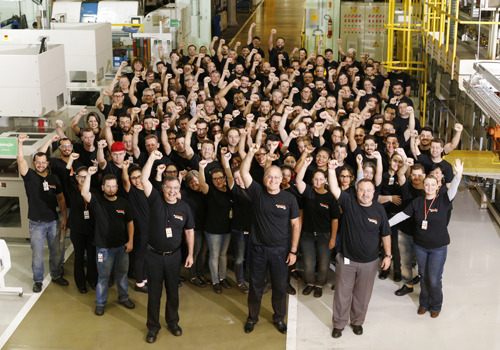 ZEN SA entered for the first time in the ranking of the 150 best companies to work for in Brazil, from Você S/A magazine. The world's largest independent manufacturer of starter drives ranks second among steel companies ahead of large and expressive corporations.

The study of which the company is based is called the Happiness Index at Work, which evaluates items such as conditions of the organizational environment, investments in training and qualification of people, as well as technical issues that characterize a consistent and sustainable management.

The Zen's CEO, Gilberto Heinzelmann, celebrates the result obtained by the company. According to him, this is the acknowledgment of a work of years. "In 2012 we set some goals, things that we would like to achieve. We work on our mission, our vision and also show our willingness to be part of this ranking of the 150 best in Brazil because we believe that of all the awards, Você S/A magazine is the most systematic in the sense of evaluating the best practices of human resources and how to assess happiness in the workplace."

Since then, the company has sought to improve its human resource practices and conduct employee satisfaction surveys to assess its strengths and weaknesses and where it was possible to improve the work environment. "After this whole period, we were pleased to be chosen among the best companies, confirming that what we have adopted as a human resources practice was a wise choice. All the improvements, the unfoldings, were acknowledged by the employees. We are very proud of that and we share this acknowledgment with all our employees. "

Heinzelmann also highlights the way the company has been through the economic crisis. Even with the difficult situation, employees feel safe and happy within the company. "Companies have been acknowledged not because they are immune to the crisis, but because they have a consistent policy, they can maintain this policy and respect people even in adverse situations. Even if the economic situation requires reduction of the picture, of the journey, the way the company does it is much more important than the fact itself. "

In numbers, the acknowledgment of the company by employees becomes even more evident. In trust in the company, the percentage of perception obtained by Zen was of 93.3%, against 90.6% average from other participants. In an opportunity for career growth, the score reached by the company was 84.4%, compared to 79.6% from other companies. The index related to the acknowledgment of people seeking to improve what they continuously do was registered in 87.2% for Zen, and 84.9% for the other evaluated companies.

Considered the most complete survey of the country's organizational climate, the ranking is based on the methodology developed by the Institute of Administration Foundation (FIA). Companies from all the segments and sizes are evaluated in it, national and multinational established in Brazil. This means that Zen is among the companies that most values its professionals, worrying about creating a pleasant work environment and investing in the professional improvement of all.

These cookies are used to understand and analyse the performance indexes of the website. They collect information in order to identify interests, delivering a better user experience that is relevant to you.

These are those that are still in the classification process, along with the individual cookie providers.