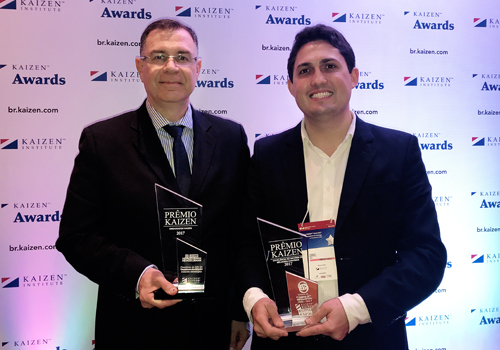 The auto parts manufacturer ZEN SA is a winner of the Kaizen Lean Award, promoted by the Kaizen Institute. The company was recognized this year in the category of Excellence in the Continuous Improvement System category, with the case related to the ZEN Manufacturing System. The Kaizen Institute also awarded the company's president, Gilberto Heinzelmann, the title of Kaizen Ambassador in Brazil. The award ceremony took place on September 11 at a ceremony held in São Paulo.

The Kaizen Lean Awards and Kaizen Ambassador honors the companies and the executive who stand out in the management focused on business excellence every year, using the concepts of continuous improvement as a principle. The Kaizen Institute is an organization that operates in more than 35 countries and seeks the elimination of waste in the companies.

Since 2012, ZEN SA has developed a robust process of continuous improvement in the organization.  The company has already been recognized as a finalist in the Kaizen Lean Award in 2016 and 2017. Once again proving ZEN's commitment to zero waste, the Kaizen Institute also honored the president of the company, Gilberto Heinzelmann, with the  Kaizen Ambassador Award, for the consistency of his work accomplished at the company. This is the first time that the award of one of Kaizen Lean's three categories and the title of Ambassador will go to the same company.

"Focus on people and the expected behaviors, planning, discipline, ethics and persistence of purpose were some of the key elements that made the evolution achieved so far possible. Maintaining the path of continuous improvement will depend on our humility in knowing that we are only at the beginning of the journey, with a lot to do. We must also keep in mind that the compass and judge of our performance will always be the satisfaction of our final client," emphasized the president.

The goal of the ZEN Manufacturing System (SMZ) is to standardize manufacturing with total employee involvement in pursuit of operational excellence. SMZ believes that each job must be certified in seven pillars, monitored through five fundamental indicators for the company's manufacturing. Employees, both production and in the support areas, implement these guidelines through a certification system, which consists of audits and action plans. At the end, each work center receives an approval seal that certifies compliance with a high level of standards of quality, safety and productivity. "Our Manufacturing System evolves through the culture of zero waste in the organization. This is fundamental to achieving results in such a competitive and challenging environment, such as the automotive industry,"says ZEN Industrial Director, Eduardo Bertolini.