ZEN S.A. is among the 150 Best Companies to Work For in Brazil for the fourth consecutive year. 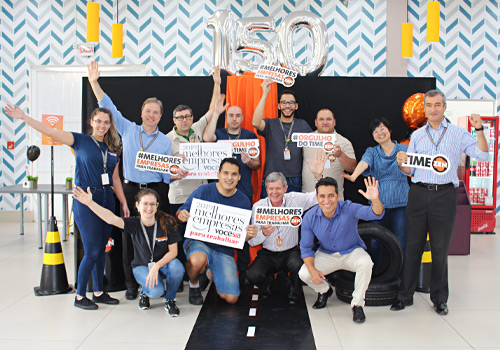 Santa Catarina industry figures in the ranking of Você S/A magazine, in the automotive sector alongside large companies such as Volvo, Renault and CNH.

For the fourth consecutive year, ZEN S.A. is among the 150 Best Companies to Work For in Brazil in the ranking of Você SA Magazine, released on Tuesday night, 19th, in a ceremony in São Paulo.  The Brusque company (SC) is the fourth best evaluated in the Automotive Industry category and is among the 60 in the general ranking. In another year, the result reflects the company's vision, which aims to conquer the pride of the team, focusing on innovation, quality and operational excellence.

Over the years, ZEN has used the survey to prepare the ranking as a basis for improving processes that directly interfere with the organizational climate. "The consistency of purpose that we have in relation to the motivation of our employees comes from the conviction that it is only through them that we can continuously meet and exceed the expectations of our customers," says Gilberto Heinzelmann, CEO of ZEN.

Every year, ZEN promotes workshops to present results and discuss actions with internal teams. "Building the climate is essentially about respecting people, with the involvement of leaders and employees who together identify strengths and opportunities and are committed to doing better every day," says HR manager Schirlei Knihs Freitas.

In 2019, the themes of sustainability and diversity management, health, safety and quality of life at work and career management stood out in the company's general panorama. This last theme alone grew by 4.2 percentage points in relation to the previous year.

ZEN evaluates that the perception about career management increased after the implementation, in 2018, of a continuous feedback platform to production employees. The employee is evaluated twice a week and, at least once a year, leader and led meet to discuss skills for individual development.

Another point that showed considerable progress in the survey is the statement "this company offers support if I feel unfair at work". In just one year the item jumped 7.7 percentage points and is above the average ranking of 150. This is a topic of great relevance to the company.  Proof of this is that, in early 2019, ZEN reformulated its ethics channel. This means of communication began to be managed by a third company, specialized and internationally recognized, ensuring confidentiality and giving more transparency to the process of investigation of complaints.

Among the topics with more than 95% approval from ZEN's employees are statements such as: this company contributes to improving the community and the environment; my company's products and services are very important to our society and people of any age, race, color and sexual orientation are treated with the same justice and respect in this company.

The survey to prepare the ranking is conducted in partnership with the Foundation Institute of Administration (FIA). Among the approximately 900 ZEN employees, 548 answered the questionnaire anonymously and another 23 were interviewed by an evaluator.

HR manager Schirlei Knihs Freitas and production operator Marcelo de Souza were present at the disclosure ceremony on Tuesday in São Paulo. The collaborator was chosen through an internal contest, in which the author of the best sentence would represent ZEN on the day of the event. "The company offers me a pleasant, ethical and healthy environment and opens doors to professional opportunities. This perspective and this feeling is in all employees. Finally, this is what makes me proud of ZEN, proud to be part of the team", reinforces Marcelo.

Packed with the slogan "Together we can go even further", leaders gathered teams to celebrate the result in a gamified way in the company on Wednesday, the 20th. The board game brought challenges that strengthen the ties of the team, valuing people and the team as a whole.